This information has been commissioned by the Goulburn Murray Valley (GMV) Fruit Fly Project and is funded by the Victorian Government’s Managing Fruit Fly Regional Grants Program. Use of this material in its complete and original format, acknowledging its source, is permitted, however unauthorised alterations to the text or content is not permitted.

Low numbers of Queensland fruit fly (Qfly) were trapped across the Goulburn Murray Valley (GMV) in November and while it may have seemed to some that they had disappeared, this was not the case. There were a sufficient number of days in late September and October for adult fruit fly, which had successfully made it through the winter, to mate and to lay eggs. If there were any early apricots, loquats, cumquats, or late-hanging oranges, apples, quinces, persimmons it is likely they were infested by fruit fly.

Throughout November, few fruit fly were trapped. This is normal and happens every year, at this time. Fruit fly came out of their winter refuges, found a mate, found fruit and laid eggs. While some of these adults died, they left their offspring in fruit as eggs and larvae or in the ground as pupae.

This year fruit fly numbers will soar again throughout December if these infested fruits were not adequately cleaned up. As a result of this year’s cooler and wetter spring there may be an increased fruit fly risk for summer and the following autumn. This is due to these conditions allowing adult fruit fly that survived the winter to survive longer than usual into the spring. Fruit fly will be less affected by lack of moisture. It also allows more bacteria, fungi and yeasts to grow in the environment – and these are adult fruit fly food sources. This means that fruit fly adults have easy access to water and food, more time to find fruit and more types of fruit to infest. Conditions will make fruit softer and maybe develop skin cracks (e.g. as in rain-affected cherries) which allows easier stinging of fruit by fruit fly.

If the La Nina event extends throughout summer and autumn 2021/2022 the fruit fly risk will be heightened due to the elongated benign weather conditions of spring 2021.

Commercial growers, landowners with small mixed orchards and home gardeners with fruit and fruiting vegetables must be on the lookout for fruit fly and be active in controlling conditions for their survival and spread.

Despite low numbers of trapped fruit fly for the first week of November 2021, more fruit fly have been trapped than in previous years. There has been a slow build-up of fruit fly this year while previously a peak occurred in September or October followed by a trough in November and then a more rapid rise during December to a peak in autumn. Cool, wet weather conditions have suppressed the September/ October peak spreading it out over September and into November.

Total numbers of fruit fly trapped within the Goulburn Murray Valley this season so far, are down from the both the 2019 and 2020 spring seasons. 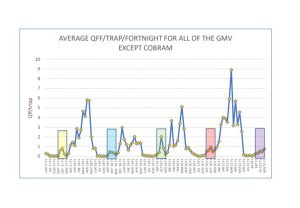 As is usual for this time of year fruit fly numbers in urban traps are higher than in peri-urban traps and rural traps. Numbers of fruit fly in urban traps have declined over the past three years. However, average numbers of fruit fly per trap in rural locations are increasing. The reason for this increase is that a very small number of rural locations are exhibiting increasing fruit fly activity and this is biasing the picture. These sites have been identified and are being 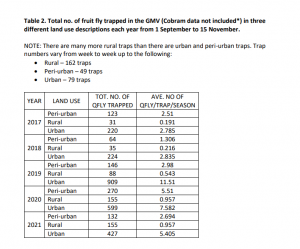 * High numbers of fruit fly are currently being trapped in Cobram. These data are a mixture of wild fruit fly and sterile fruit fly which have not yet been separated. From early September 2021   2 million sterile fruit fly have been released over Cobram per week and will continue into April 2022 as part of a SITplus pilot SIT release project designed to add additional fruit fly control to the current area-wide management program.

Information accessed from the Bureau of Meteorology suggests that conditions forecast for December 2021 will not be limiting for fruit fly survival and expansion.

Rainfall may not vary much as there is only a 50-60% chance of rainfall exceeding the median level (25-50mm in December). There’s only a 50% chance that maximum temperatures will be higher than the December median (27-30˚C) which is ideal for fruit fly survival. However, there is a much higher chance (65-70%) that December minimum temperatures will be higher than the median (12-15˚C), thus allowing a higher level of comfort for fruit fly than is usual for this time of year.

Fruit fly numbers are high, now, in urban areas. Traps should be out, and netting should be purchased or repaired from last season for use just before fruit starts to ripen. An alternative to netting is for local groups of home gardeners to apply fruit fly baits to their yards every two to three weeks but staggering the date of baiting so that there are weekly baiting events throughout the group.

Any crop that is ripening or ripe throughout December is a fruit fly target within most urban areas of the Goulburn Murray Valley.

Outlook for farmers and commercial orchardists

However, if your orchard or farm is close to town, within 1km of the town boundaries and has had significant fruit fly populations in December in the past, then it is important that you set traps and get baits and, if necessary, approved pesticides. It is also important to monitor those traps, check your fruit for signs of infestation and also check nearby non-crop fruit that might be nearby which could act as a fruit fly reservoir. These include fruiting plants on roadsides (blackberries, Indian fig, etc), creek banks (e.g. rogue stone fruit and citrus), abandoned orchards, and importantly your own house gardens (front and back).

Even though no areas have reached significant fruit fly numbers – to the extent that they are in outbreak proportions – the following areas have registered concerning trap capture rates. It is recommended that those who reside or farm near these towns ensure they have fruit fly traps out and have a fall-back position if numbers go up in their traps (e.g.  baiting, netting or tree removal).

This report was produced by Andrew Jessup, Janren Consulting Pty Ltd in conjunction with the analysis of regional trapping data supplied by the GMV Fruit Fly Area Wide Management Project.