This information has been commissioned by the Goulburn Murray Valley (GMV) Fruit Fly Project and is funded by the Victorian Government’s Managing Fruit Fly Regional Grants Program. Use of this material in its complete and original format, acknowledging its source, is permitted, however unauthorised alterations to the text or content is not permitted.

Fruit fly are present in increasing numbers in urban locations, right now. They are very likely to increase over the summer and cause severe damage to garden crops – unless area-wide management strategies are in place. Essential control measures include:

fewer fruit for fruit fly to infest and high heat killing adults as well as eggs and larvae in exposed fruit (on ground and on-tree) and pupae in exposed ground. This scenario generally occurs in the Goulburn Murray Valley but it has not been the case, for a number of years recently. This was due to an extended La Niña weather pattern existing in South Eastern Australia from March 2020 to early 2021. Currently another La Niña weather pattern is in place but, despite this, BOM data suggest that La Niña will not lead to increased rainfall, at least during January 2022. 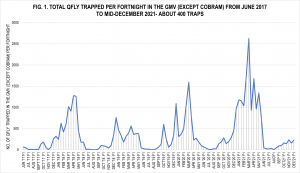 *Cobram data removed due to delayed separation of wild fruit fly from sterile fruit fly as a result of the SITplus sterile insect technique pilot trial over Cobram.

FIG. 5. Chance of total rainfall forecast for November 2021 being higher than the 10-year average

FIG. 6. Chance of maximum temperatures forecast for November 2021 being higher than the 10-year average

FIG. 7. Chance of minimum temperatures forecast for November 2021 being higher than the 10-year average 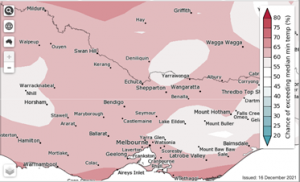 This report was produced and supplied by Janren Consulting Pty Ltd for the purpose of the GMV Fruit Fly Project.