Trapping data for Cobram (rural and urban) are not included in this report because sterile Queensland fruit fly have not been separated from wild fruit fly since late January due to the Sterile Insect Technique Pilot Trial being carried out in Cobram. When these data are known they will be reported.

During January and the first 2 weeks of February 2022, a total of 2,903 fruit fly were trapped from about 295 traps (Figure 1). This is lower than for the same period last year which recorded 3,365 Queensland fruit fly.

This year the general trend in numbers is following the usual pattern. Queensland fruit fly numbers being trapped are now on the rise in peri-urban and rural areas but declining in urban areas – although urban fruit fly numbers per trap are still dominating the Goulburn Murray Valley landscape.

Last year’s fruit fly season was a heavy year for Queensland fruit fly. This was most likely due to a combination of benign weather conditions during the previous autumn, winter and spring (i.e. La Nińa event); plus a large volume of unharvested host crop due to COVID restrictions. It is believed that the combination of the Goulburn Murray Valley’s area-wide management program and periodic weather conditions impacted adversely on fruit fly survival this season.

The graph below (Figure 1) shows that there has been a decline in numbers of Queensland fruit fly trapped during the late spring and early summer this year compared with last year. However, fruit fly numbers have jumped significantly during the last 2 weeks (Fig. 1). 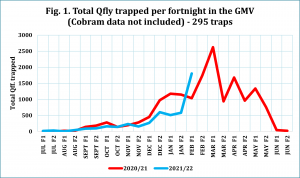 Impact of land use type

Urban Queensland fruit fly populations dominate the Goulburn Murray Valley at present (Table 1) although they tended to decline during the third week of this period (Figs 2 and 5). Peri-urban fruit fly are building up (Figs 3 and 5). Rural populations were static for the first 2 weeks but are now on the rise (Figs 4 and5).

Table 1. Total Queensland fruit fly trapped over the past 3 weeks according to land use (Cobram data excluded) [295 traps]. 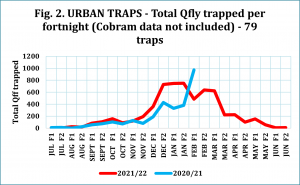 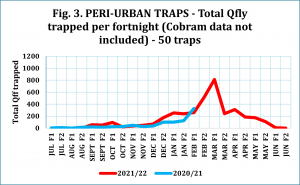 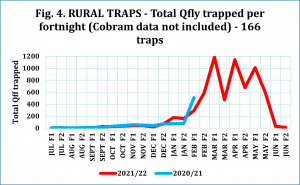 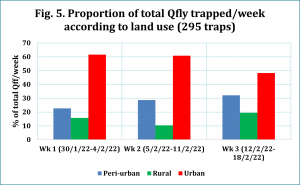 Outlook for home gardeners in the Goulburn Murray Valley

Typically, at this time of year fruiting plants are finishing off in urban areas of the Goulburn Murray Valley as fruit is harvested, eaten by birds or deteriorate and fall off due to hot, dry weather. As a result, fruit fly populations generally decline during January and February in urban areas of the region. With current relatively benign weather conditions fruit and, consequently, fruit flies are staying on the landscape longer than usual in urban areas. In the case of Queensland fruit fly, they are living longer and, hence, laying more eggs – and, staying for longer periods in urban areas. This significant urban inoculum of fruit fly will probably spread to commercial orchards in late summer and autumn in response to large volumes of ripening and ripe fruit.

The Bureau of Meteorology forecasts benign weather conditions for fruit fly survival and spread (see section below on Weather Outlook). These weather patterns favour the survival of both fruit on tree/vine/bush and fruit fly.

It is worth noting that irrigation provides ideal conditions for fruit fly maturation, survival and proliferation in urban, peri-urban and rural areas. Populations can explode and then, when crops in urban locations are diminished, will move out of urban areas, into and through peri-urban places and into commercial orchards. This migration is facilitated by high volumes of fruit in commercial orchards ripening from February through May and, in some cases, irrigation. If urban growers can deal with fruit fly in their gardens using the usual area-wide management strategies described in the key points above, they will achieve good production in their own garden and also assist commercial growers by cutting off the urban-to-rural migration of fruit fly.

Queensland fruit fly start to build up in peri-urban and rural locations of the Goulburn Murray Valley during February. Many fruit fly move out of urban areas and into rural locations due to lack of resources, irrigation in rural areas and mass-ripening of fresh fruit. However, some fruit fly may have overwintered in rural locations within evergreen canopies often in sites close to houses and other heated out-buildings. These flies will start moving out of hibernation and start looking for mates and fresh ripening fruit to infest.

It is essential for commercial growers to ensure there are no unwanted fruiting plants within about 1km of their orchard: roadside feral fruits (e.g. peaches), plants along creek banks, on Crown land, abandoned orchards and, very importantly, the house yards of your orchard and the neighbours. These fruit are the staging points for a rapid increase in fruit fly populations that would then threaten crops.

Commercial orchards situated within 1km of hot spot locations mentioned below are especially at risk from Queensland fruit fly. Vigilance with traps and by fruit checking is essential here.

Up to the first week of February 2022 there was a general trend of a lower fruit fly count this season compared with last season. This then changed with a marked jump in numbers throughout urban, peri-urban and rural locations. Urban populations are still dominating the Goulburn Murray Valley.

There are a few locations that bias total numbers heavily. These are the so-called ‘hot spots’. Hot spots can be habitual, where they occur each year at approximately the same time or they can be new hot spots where fruit fly have moved into a new area, settle there and proliferate.

Active area-wide management works, especially netting and host plant removal (in urban areas), baiting (in commercial production areas), trap monitoring and fruit checking (in all areas of the Goulburn Murray Valley) will, over time, erase these hot spots. There have been some successes in hot spot deletion in the region since the project commenced.

Table 2. Presence of fruit fly hot spots (sites trapping ³ 12 fruit fly in the last 3 weeks) according to land use type.

The abovementioned sites are of concern as they could become sites from which large numbers of fruit fly could establish and then spread, so it is important that members of the community who have gardens and orchards in these areas take precautions to reduce the ability of fruit fly to infest fruit and to survive in them.

Weather outlook and its impact on fruit fly

Over the next few weeks, the numbers of Queensland fruit fly trapped in the Goulburn Murray Valley, if they follow normal trends, will rise. This will be the commencement of the peak fruit fly season for 2021/22 which will then spread, if left untouched, from urban areas to commercial orchards in the local district.

Weather forecasts for March 2022 were accessed from the Bureau of Meteorology data indicates that:

The Bureau of Meteorology’s forecasts suggest that March conditions will not differ appreciably from the average. Although the forecast temperatures are optimal for fruit fly survival and development rainfall is a limiting factor. Fruit fly survival in areas of low summer rainfall is enhanced by the prevalence of urban irrigation and the presence of evergreen canopies in which fruit fly can find shelter. Orchards outside of urban areas are now starting to produce large volumes of ripening and ripe fruit, often with irrigation. During late February and March fruit fly will migrate from urban areas, through peri-urban orchards and gardens and into outlying rural commercial orchards and gardens. 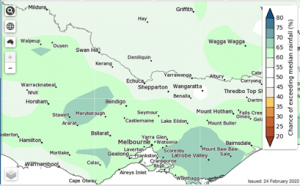 Figure 7. Maximum temperatures: likely differences from the average for weeks 1 and 2 of March 2022 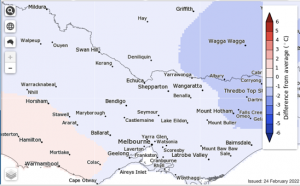 Figure 8. Maximum temperatures: likely differences from the average for weeks 3 and 4 of March 2022 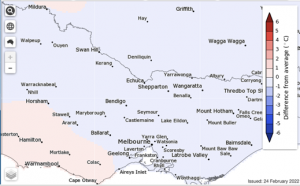 Figure 9: Minimum temperatures: likely differences from the average for weeks 1 and 2 of March 2022 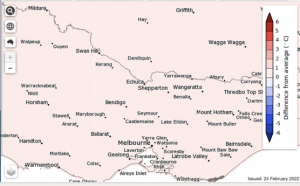 Figure 10: Minimum temperatures: likely differences from the average for weeks 3 and 4 of March 2022 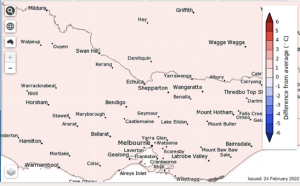 This report was produced and supplied by Janren Consulting Pty Ltd for the purpose of the Goulburn Murray Valley Fruit Fly Program. The program is supported by the Victorian Government.