Total numbers of Queensland fruit fly (Qfly) trapped in the Goulburn Murray Valley (GMV) peaked during weeks 1 and 2 of February 2022 with 1,775 flies trapped (Fig. 1). This was a significant increase over the data for weeks 3 and 4 of January where there were 567 flies trapped. Since the peak, up to 15 March, the count has dropped to 1,391 flies.

The numbers of Qfly trapped in the region will decline as autumn sets in. Fruit fly activity will proceed however, despite lower numbers being trapped. This is because temperatures will become too cold for trapping but will not be cold enough to stop mating, egg-laying and larval development – at least in the first half of autumn (see Fig. 6 for a description of fruit fly activity throughout a typical fruit fly season).

Now is the season for fruit flies to build up before the cold hits and if they survive the winter will start a new season of fruit damage next spring. This is where orchard (or post-harvest) hygiene becomes important. You will break the fruit fly cycle by successfully cleaning up your orchard, home garden and nearby untended land of potential fruit fly host material: No fruit = No fruit fly.

The 2021/22 fruit fly season started off as less severe than last season (2020/21) (Fig. 1 and Fig. 2). There was a quick rise in fruit fly numbers from about the second half of January but, even so, numbers are down compared with last season. If autumn fruit flies can be managed successfully then fly numbers for next season will also be down and so will be more easily managed next spring. 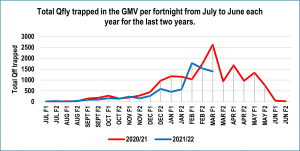 In most years during March there is a cross-over of fruit fly populations from urban areas into rural areas (Fig. 3). This aligns with fruit becoming scarcer in urban areas as it is harvested or eaten by birds and becoming more plentiful in rural areas of the GMV as large-scale pome and stone fruit crops ripen. This phenomenon is occurring again this year (Fig. 4 and Fig. 5).

Even though numbers in urban areas may be down this does not mean that all fruit flies have left urban areas. Many adults may have moved on, but they will have left their offspring in urban areas in the form of eggs, larvae and pupae in and around late-infested fruit that hasn’t been picked up and destroyed. These will form adults towards the end of April when it’s too cold to be attracted to traps and will overwinter in warm spots on the urban landscape so that they are ready to infest fruit in the new season next spring. Removing these infestation sources before flies can find them will break the fruit fly cycle and reduce the number of adults surviving into next spring. 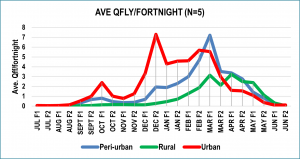 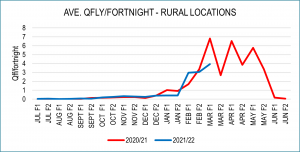 Table 1 lists GMV fruit fly trapping locations and numbers of sites in each location where greater than or equal to 20 Qfly were trapped in the three-week period to 18 March 2022. This figure (i.e. ³20 Qfly in 3 weeks) indicates dangerously high Qfly populations which should be managed before they become a serious problem in current and future crops.

It is recommended that:

Impact of past weather patterns on fruit fly activity

Fruit fly trapping data have been collected throughout the GMV for at least 5 fruit fly seasons (from 1 July to 30 June). Fruit fly activity, based on the numbers of trapped fruit flies, varies throughout the year (Fig. 6). March is most often the month where most fruit flies are trapped and these trappings correspond with the ripening of large volumes of pome and stone fruit in commercial orchards. It also corresponds with the most benign weather conditions for fruit fly survival and proliferation.

Flies emerging from fruit infested at this time of year (emergence of these flies will be in early April) typically are not attracted to traps due to the cool weather in April. It will seem that flies are in decline but that’s not necessarily the case. These flies will ‘hibernate’ over winter as adults. The greater the numbers of these flies overwintering the greater the problem will be in spring and next cropping season if not managed adequately. 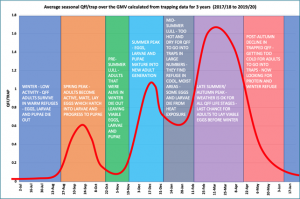 Table 2 and Table 3 compare daily mean temperatures ([max+min]/2) averaged over a fortnight and fortnightly total rainfall recorded at Cobram Post Office for the last 5 fruit fly seasons. They show that temperatures in early 2021/22 were slower to rise than in previous years (early October to mid-December). This caused a delay in fruit fly population build-up in late 2021. With the exception of early February 2022 rainfall has been higher in 2021/22 than most other years. That and corresponding higher humidity and lower desiccation meant that there was negligible adverse climatic impact on fruit flies and the fruit they infested in December and January. The high rainfall in March 2022 will exacerbate the fruit fly problem.

Information provided by the Bureau of Meteorology:

Rainfall: A 60% to 65% chance that rainfall will exceed the average of 25mm to 50mm during April.

Normally, fruit fly activity declines in late April so that any eggs or larvae in fruit or pupae in the ground in the GMV past mid-April will die due to the cold.

But – forecast weather conditions for April 2022 will not be damaging to fruit fly survival and activity. They suggest that the fruit fly season will extend further into autumn than usual. Fruit fly activity in the form of mating, egg-laying and consequent fruit damage followed by adult emergence will remain significant possibly into May if the weather does not turn cold quickly.