Unusually for this time of year fruit fly numbers remained very high during early May with over 3,000 Queensland fruit fly trapped per month from February to May. Up until February 2022 the 2021/22 fruit fly season was shaping up to have low fruit fly numbers. There was a significant increase in populations in February which was favoured by cooler maximum temperatures and more rainfall. This signaled the second year in a row with a La Niña weather pattern. Queensland fruit fly thrive during La Niña events in South-East Australia.

Several factors may have contributed to this expansion in fruit fly numbers:

Fruit fly trap numbers in locations of the Goulburn Murray Valley were very high during 2020/21 especially from February onwards. Queensland fruit fly numbers for 2021/22 were, in general, like those from 2020/21 except that peak monthly fruit fly captures occurred a month later this year. Weather conditions which were favourable to fruit fly have persisted longer this year than normal allowing a high level of fruit fly to survive throughout autumn to mid-May (Fig. 2).

Queensland fruit fly numbers reached high levels during 2021/22 but peak trap captures were not as high as last season (Fig. 3).

Numbers peaked in urban sites during early February 2022 (Fig. 4). This is unusually late as fruit fly populations generally peak in December/ January. It’s likely that this is due to an extended spring with cool temperatures persisting into late spring last year.

Figures 2, 3 and 4 show when Queensland fruit fly peaks occurred in the different land use types. Fruit fly peaks occur early in urban areas, mid-season in peri-urban locations and later in rural sites. One conclusion is that Queensland fruit fly move from urban sites, through peri-urban and into rural locations during the season. Possibly this is due to seasonal and the range of fruit availability starting in urban areas, then dying off with fruit fly moving into rural regions when high fruit volumes start to ripen.

Table 1 gives a ranking of the highest to lowest averages of fruit fly/trap for each trapped location within the Goulburn Murray Valley during autumn 2022. It shows that some areas have high averages.

As mentioned above, Queensland fruit fly is not evenly spread over these areas. Of the 8 traps servicing Undera only 1 trap accounts for over 72% of fruit fly trapped during 2021/22. Of the 19 traps in Orrvale there are 2 that make up nearly 52% of total catches for that town.

Goulburn Murray Valley locations with significant hot spots for May to June 2022 were as follows:

Figures 5, 6 and 7 compare average 15-day temperatures (max. and min.) and total 15-day rainfall for Cobram Post Office comparing data for 2018/19 and 2021/22 which were collected from SILO Australian climate data from 1889 (accessed 15 June 2022). Spring temperatures for 2021/22 were generally lower than those for 2018/19 by up to 3˚C to 5˚C. This possibly resulted in delayed commencement and expansion of fruit fly populations but, at the same time, encouraged fruit fly survival in greater numbers, until temperatures returned to more normal levels in early February. Numbers of fruit fly on the landscape were able to build up to high numbers by February. Queensland fruit fly survival and build-up was further facilitated by higher-than-average rainfall (Table 3) as this reduced desiccation stress on the insects as well as for fruiting crops – higher fruit fly survival, more crop set, heavier crop production, more hosts for fruit flies to infest, more fruit fly emergence.

Weather outlook for June and July 2021

The Bureau of Meteorology, (accessed 25 May 2021) gives the following outlook for the Goulburn Murray Valley for two-week period from 18 June to 1 July 2022:

The Bureau of Meteorology, (accessed 25 May 2021) gives the following outlook for the Goulburn Murray Valley for the month of July 2022:

These weather outlooks indicate fruit fly will be able to survive at least this part of winter in greater numbers than normal.

Caution: The above mentioned forecast weather conditions point to the probability that fruit fly will survive in the Goulburn Murray Valley in greater numbers than in previous colder, drier years. It is very important to make sure all fruit and fruiting vegetables are harvested and used or picked up and destroyed.

Winter temperatures and higher than normal rainfall favour population build up. Home heating, which artificially raise localised relative humidity and temperatures (close to the house) will improve the survival of fruit fly eggs, larvae, pupae and adults at that site.

If your property is close to (within 500m) of urban or peri-urban fruit fly host plants, or feral hosts along roads or channels or in abandoned orchards, particularly if you are close to any of the GMV hot spots (Table 2) you should keep a very close watch on:

Note: There will be little fruit fly activity observed in traps and in infested fruit from mid-May to late August in the Goulburn Murray Valley due to cold conditions. It should be remembered that weather conditions vary considerably from area to area and while it may be cold in one area temperatures or rainfall may be higher in another. A few degrees higher than average, due to geographical location, may encourage fruit fly activity even infestation at that site while other cooler areas will not. It is important to keep watch on fruit fly along with the local weather.

Growers are advised to maintain (or, if not done yet, purchase and place out) their male- and female-targeting fruit fly traps and manually check any ripening fruit in their house yards, orchards or nearby for fruit fly infestations. Growers should also ensure they have timely access to approved fruit fly baits and pesticides should trap numbers and/or fruit infestations increase in severity. Your local Fruit Fly Coordinator, staff from produce stores and Agriculture Victoria can provide advice. 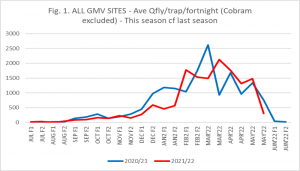 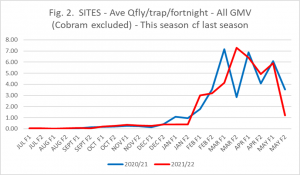 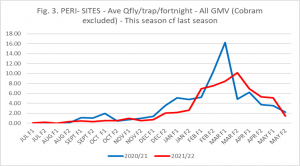 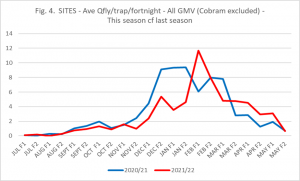 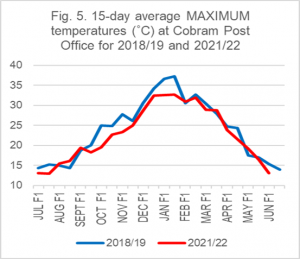 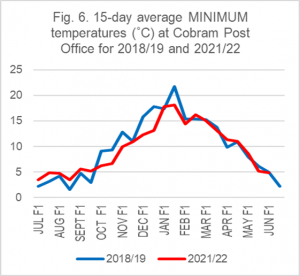 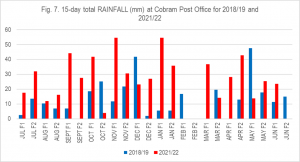 For assistance in managing fruit fly, contact the Project Coordinator at the GMV Fruit Fly Office by phoning (03) 5871 9222 or email gmvfruitfly@moira.vic.gov.au.